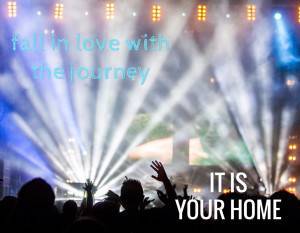 Whether you knew it at the time or not, when you started this journey you didn’t sign up to be an actor.You signed up for the journey of an actor.

I coach actors every week on the business of acting, and on the mindset it takes to create success. Each actor has their own struggles and questions, but every once in a while I find myself repeating the same coaching over and over and over. This is one of those times.

I heard this quote a lot growing up: “The journey is the destination.” I don’t know that it meant much to me then, but I have come to learn the profound wisdom in that statement. 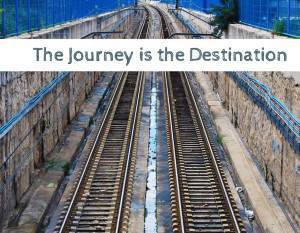 The destination—fame, money, your own show, an Oscar—will not bring you happiness. It simply doesn’t work that way. It is absolutely a worthwhile endeavor to pursue those things, but if you are not alreadypracticing happiness, nothing outside of yourself will make you happy.

I’ve seen it so many times it makes me sad. I talk to an actor about how their career is going. They say, “OK, but I just wish I had an agent.” A few months later, I see them again. And they have an agent! “But I’m just not getting enough auditions,” they say this time. Some time later I see them again and wouldn’t you know, they’re going out all the time and just booked a co-star role!

Unfortunately, “I just can’t seem to book a commercial.” Months later they’ve just shot a commercial, but it only played regionally. Then they book a guest star, but it wasn’t top of show. Then they’re recurring on a show, but, “I’m not a series regular.” Now they’re a series regular, but “I just want to win an Emmy.” Now they have an Emmy, but “I really want to be going out for film roles.”

Ahh!!! There is no thing that will bring you happiness! And now you’ve spent your entire career worrying about the next thing you don’t have yet, and missed the ride of a lifetime.

Be honest. Are you stuck in the land of “but”? Are you constantly disappointed that you don’t have that agent, or that role on your résumé, or that money in your bank account? Are you consistently disappointed with where you are, even though a couple years ago you would have freaked out to be where you are now? It’s not right or wrong, but if you don’t acknowledge it, nothing will change.

You see, we’re in a culture that celebrates accomplishment, but we rarely—especially in this business—discuss what it takes and what it looks like to get there. There is no getting around the 10,000 hours to mastery. It’s not the only thing that matters, but effort (and oftentimes a Herculean effort) is the requisite to the achievements we so often desire. Think about that. Thousands of hours. The night you win an Oscar is maybe five of those, so you still have thousands and thousands of hours of your career! The daily practices, the classes, the networking, the marketing, the self-producing, the days on set—these are the ingredients of your journey.

Fall in love with the journey. Choose to love the daily practice of your career. Happiness will not come from any point in your journey; it will come from the practice of happiness itself. And the more you practice happiness on a daily basis, so much sweeter will your achievements be.

As soon as you start living as if the process is its own reward, watch the end results begin to flourish. Journey well.